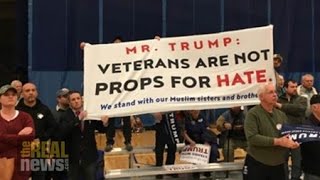 Iraq War Veteran and Purple Heart recipient Zach Choate says he was kicked out of a Trump event this week to say no to racism, Islamaphobia, and xenophobia 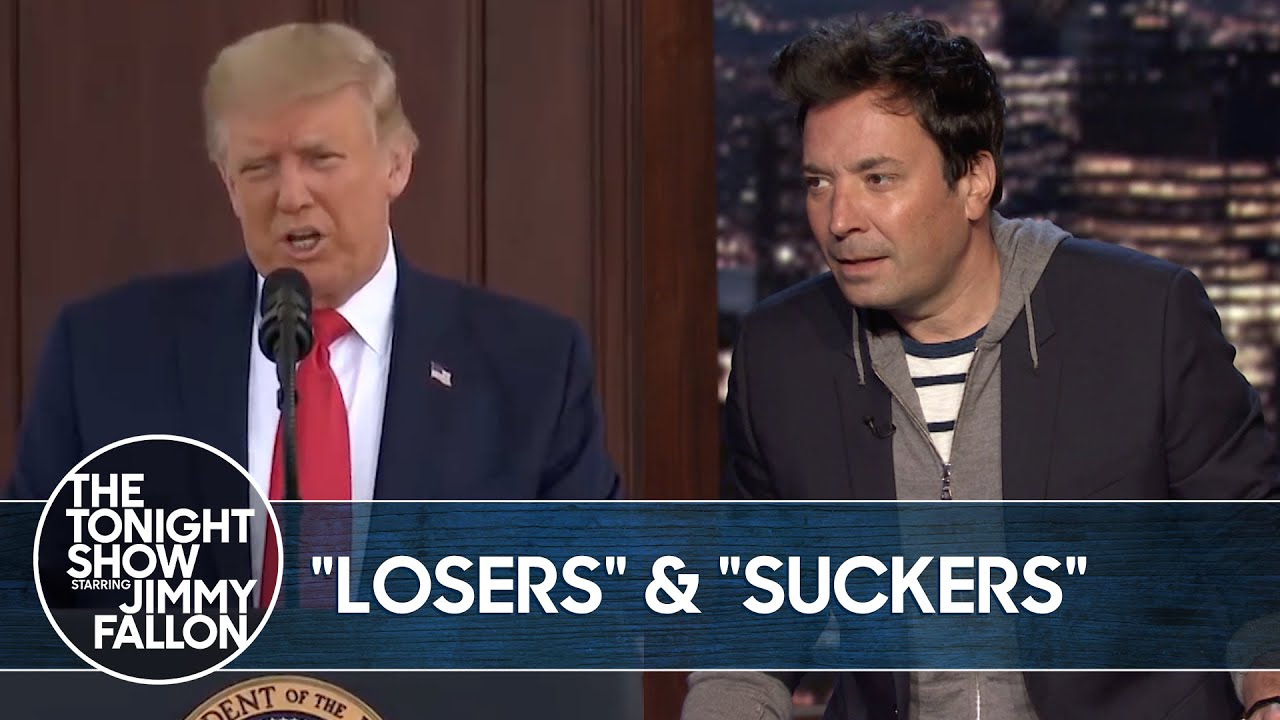 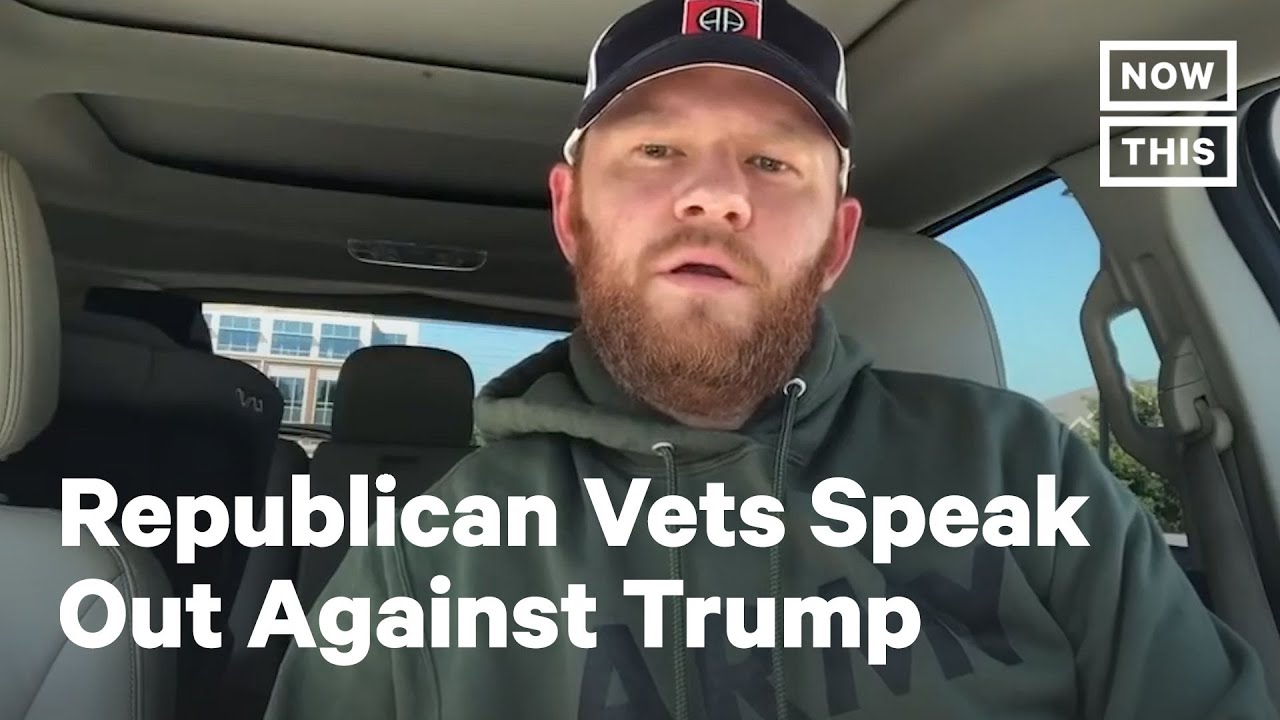 These Republican Vets are Refusing to Vote for Trump | NowThis

‘Mr. Trump has abandoned our veterans’ — These Republican vets say they refuse to vote for Trump in 2020.
» Subscribe to NowThis: http://go.nowth.is/News_Subscribe
» Sign up for our newsletter KnowThis to get the biggest stories of the day delivered straight to your inbox: https://go.nowth.is/KnowThis

NowThis is your premier news outlet providing you with all the videos you need to stay up to date on all the latest in trending news. From entertainment to politics, to viral videos and breaking news stories, we’re delivering all you need to know straight to your social feeds. We live where you live. 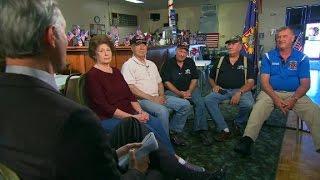 Combat veterans on Trump: Listen to your generals 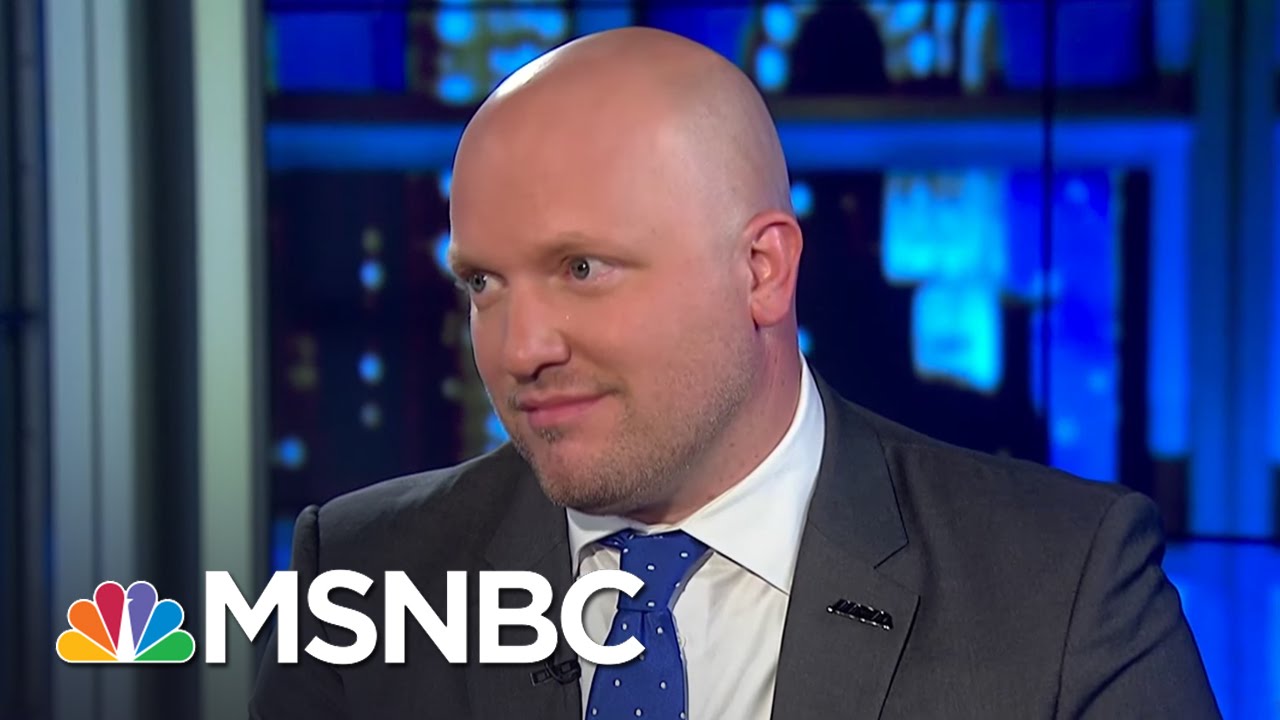 Paul Rieckhoff, founder and CEO of Iraq and Afghanistan Veterans of America, talks with Rachel Maddow about the widespread outrage over Donald Trump's treatment of Gold Star parents Khizr and Ghazala Khan.
» Subscribe to MSNBC: http://on.msnbc.com/SubscribeTomsnbc 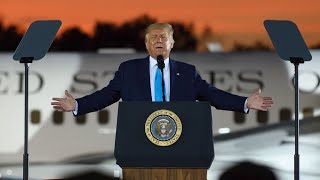 Despite his claims to respect veterans more than anyone, President Donald Trump has frequently made offensive statements about members of the armed forces and their families. 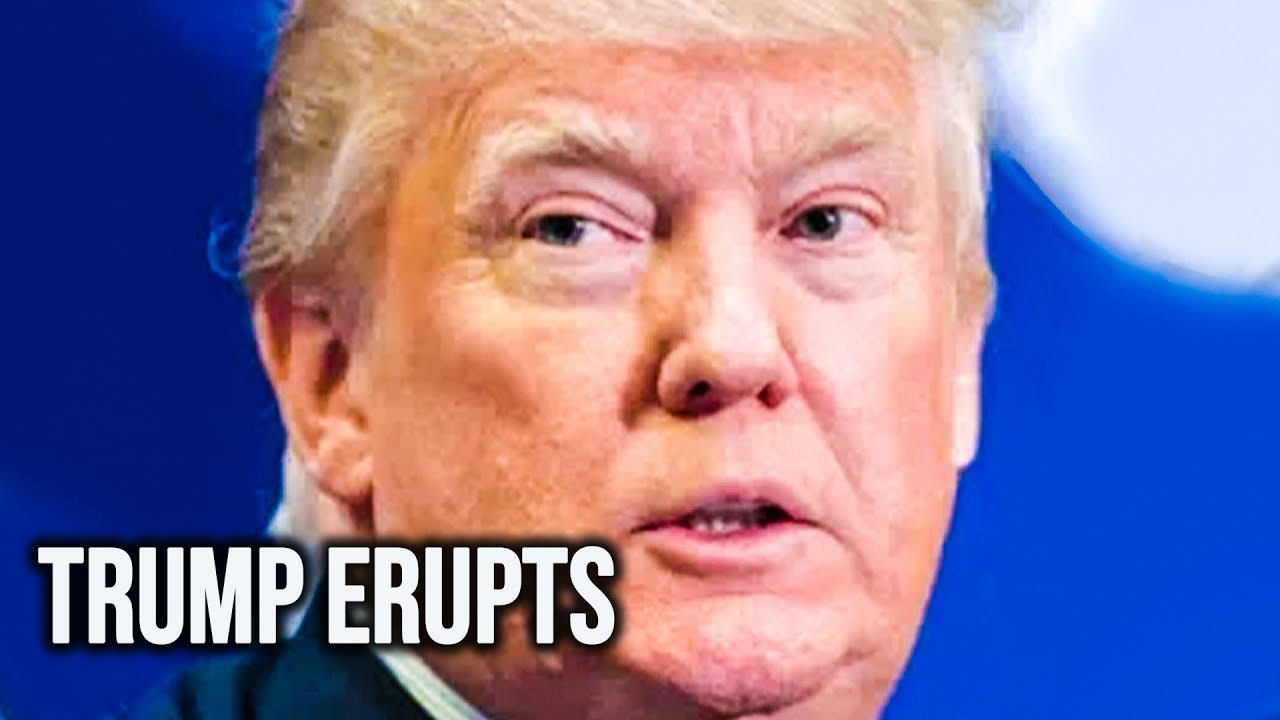 Meta announces that Donald Trump will be reinstated on Facebook and Instagram, which causes Trump to explode with a strange message to Truth Social. John Iadarola and Miranda Scholl break it down on The Damage Report.

"Meta said on Wednesday it will reinstate former President Donald Trump’s Facebook and Instagram accounts after they were suspended following the 2021 Capitol insurrection.

Nick Clegg, Meta’s president of global affairs, said the accounts will be restored “in the coming weeks.”

“Americans should be able to hear from the people who want to lead the country,” Meta said in a statement to Mediaite. “We don’t want to stand in the way.”

Meta banned Trump from its platforms after the Jan. 6, 2021 insurrection at the Capitol, where a mob of his supporters stormed the building in a vain attempt to overturn the 2020 presidential election. He spent the previous two months falsely claiming the election had been stolen from him, frequently using social media to do so."

Help build the Home of the Progressives http://tyt.com/JOIN 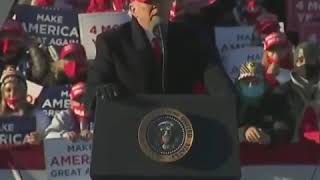 Recorded with ScreenCastify (https://www.screencastify.com), the screen video recorder for Chrome 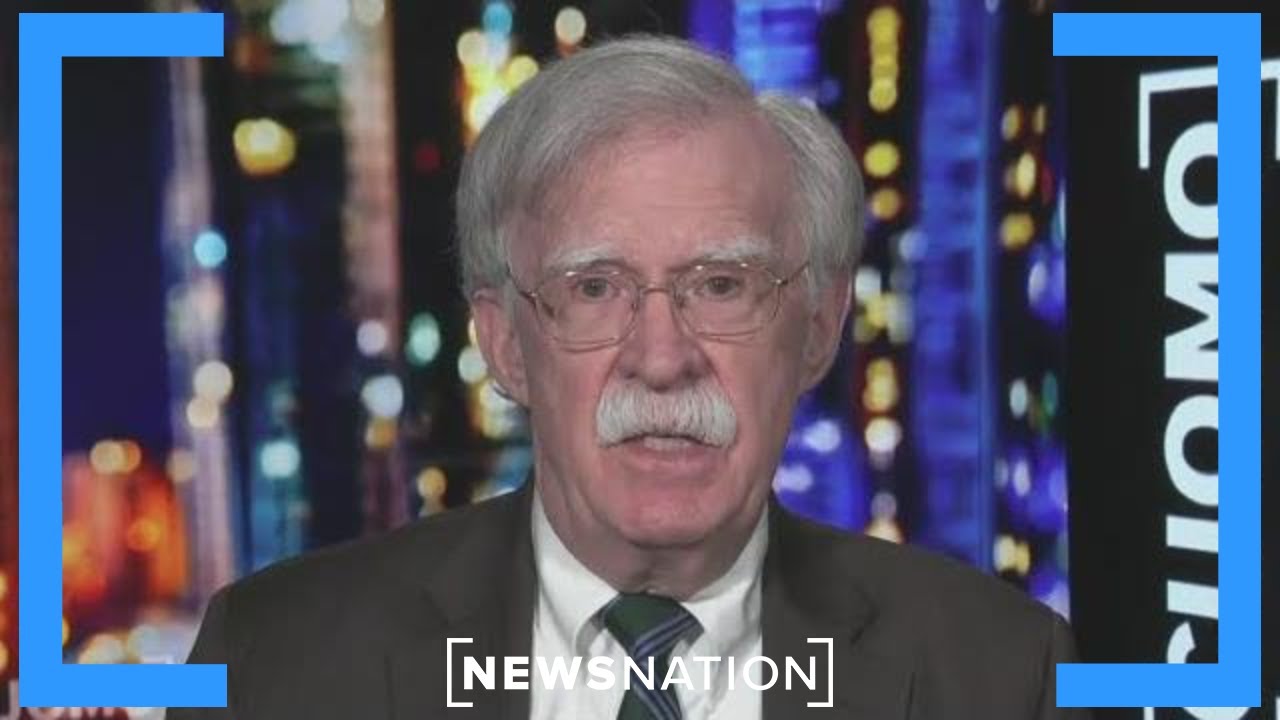 NewsNation is your source for fact-based, unbiased news for all America. 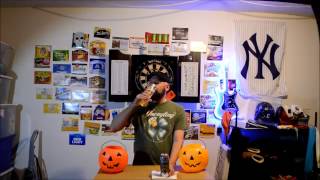 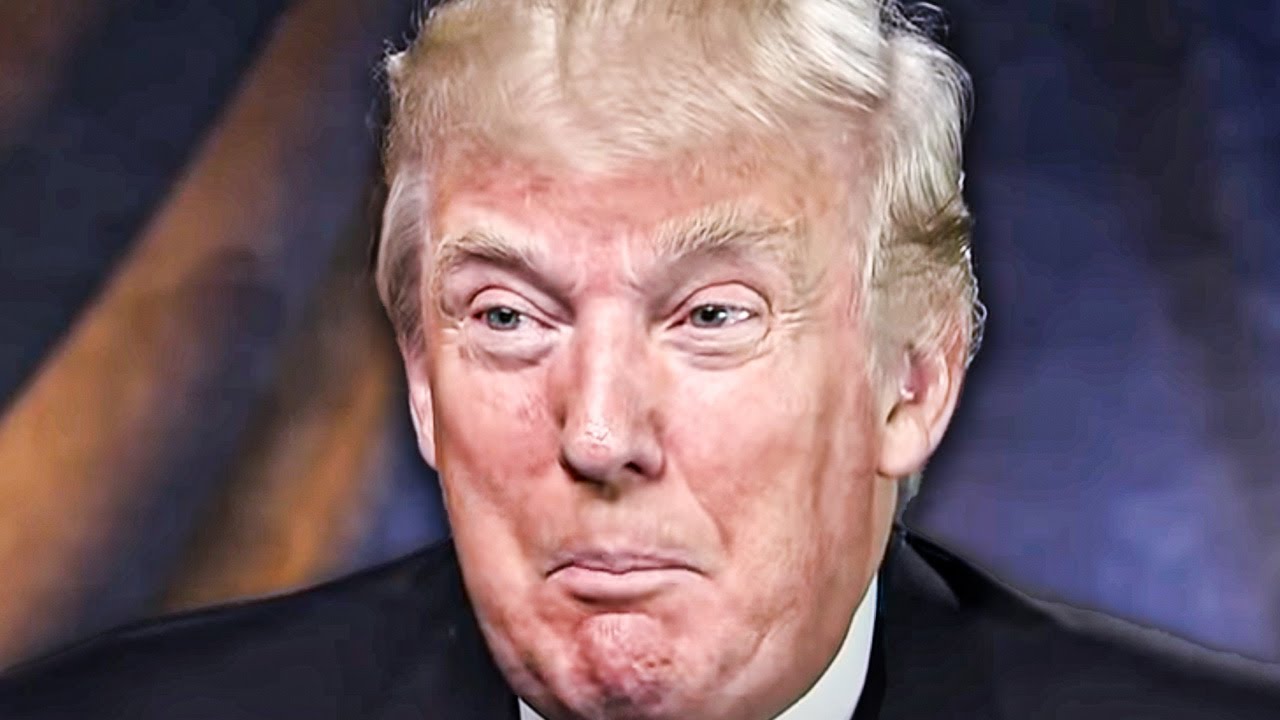 Trump IMMEDIATELY Trashes Facebook After They Allow Him Back On

Facebook's parent company Meta announced this week that they would be caving to pressure and allowing Donald Trump back on Facebook and Instagram. Trump responded by going on Truth Social and immediately trashing the company as stupid for ever banning him in the first place. But Meta will take the abuse because it will generate tons of revenue for them in the next two years, as Ring of Fire's Farron Cousins explains.

Check out our merch by visiting our store: https://www.buyrof.com/

Support us by becoming a monthly patron on Patreon, and help keep progressive media alive!: https://www.patreon.com/TheRingofFire

Support Ring of Fire by subscribing to our YouTube channel: https://www.youtube.com/theringoffire

*This transcript was generated by a third-party transcription software company, so please excuse any typos.

Facebook's parent company. Meta announced yesterday on Wednesday that they were in fact going to reinstate Donald Trump on both Facebook and Instagram. Now, this came after, uh, Trump's lawyers reached out last week, wanted to have a sit down talk with Meta, talking about getting Trump back on the platform. Trump then last Friday, actually last Thursday, I think it was took to truth social to just absolutely bash the leadership of Facebook. Essentially calling them idiots, saying they made the dumbest business decisions of all time. And then I guess that bullying worked because on Wednesday, meta says, all right, Donald, you can come on back. And Trump responded by once again, attacking Facebook. So like you just got everything you wanted. The company caved to your pressure and your response is to further insult them. Here is what Trump said on Truth Social after the announcement was made, Facebook, which has lost billions of dollars in value since de platforming your favorite President me, has just announced that they're reinstating my account. Such a thing should never again happen to a sitting president or anybody else who does not, who is not deserving of retribution. Thank you to Truth Social for doing such an incredible job. Your growth is outstanding and Future Unlimited.

Yeah. See, here's the thing. First of all, the growth on truth social is nonexistent. Your future is unlimited. No, the future might be a shutdown before the end of the year. So let's just make sure we're all clear about what's really happening at Truth Social. And of course he's trying to hype it because it's taking a big hit right now with Donald Trump. Moving back to Facebook and the, uh, reports of him wanting to go back to Twitter in June. So the Facebook thing, does that hurt truth, social? I don't think so that much. I mean, yeah, your grandparents are probably gonna be on, uh, uh, Facebook sharing Donald Trump posts, and we get it. It sucks. But they made the decision. It's their decision to make. We have to live with it. The thing is, they didn't do this because Donald Trump's lawyers went begging. They didn't do this because Donald Trump threatened and insulted them. Meta made this decision because the only thing they care about is money. At the end of the day, for these people, it's not about politics. It's not about freedom of speech, it's about money. And by the way, that's what Donald Trump's lawyers made clear in their letter. We wanna be able to advertise meta, but if Trump is banned, we can't do that. And Meta realized, we have a guy here sitting on a massive campaign war chest in his super pacs. He's got a lot of money to spend and not a lot of places

To spend it. He knows how valuable Facebook ads were for him in the 2016 election and the 2020 election. If we kick him off, if we keep him kicked off, we don't get that money and we want that money. So we're gonna let him back on and we're gonna gladly take that money. That's what this decision is all about. It's not politics. It's not caving to Trump or his lawyers. It's about the fact that the folks at Meta have giant dollar signs where their eyeballs are supposed to be, and that's the only thing they care about. 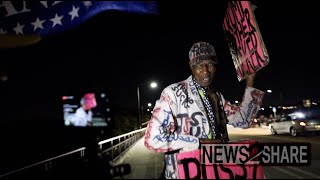 One lone protester held signs reading "P***y a** Trump" and "Trump kiss my a**" along with a jacket that had "Trump sucks" and "F*** Trump" written all over it.

Trump supporters holding America First flags chanted "You're a f****t" at him in response.

NO REUSE WITHOUT PERMISSION Please contact Ford Fischer at fordfischer@news2share.com or call (573) 575-NEWS to license video. Photos and additional footage may be available upon request. 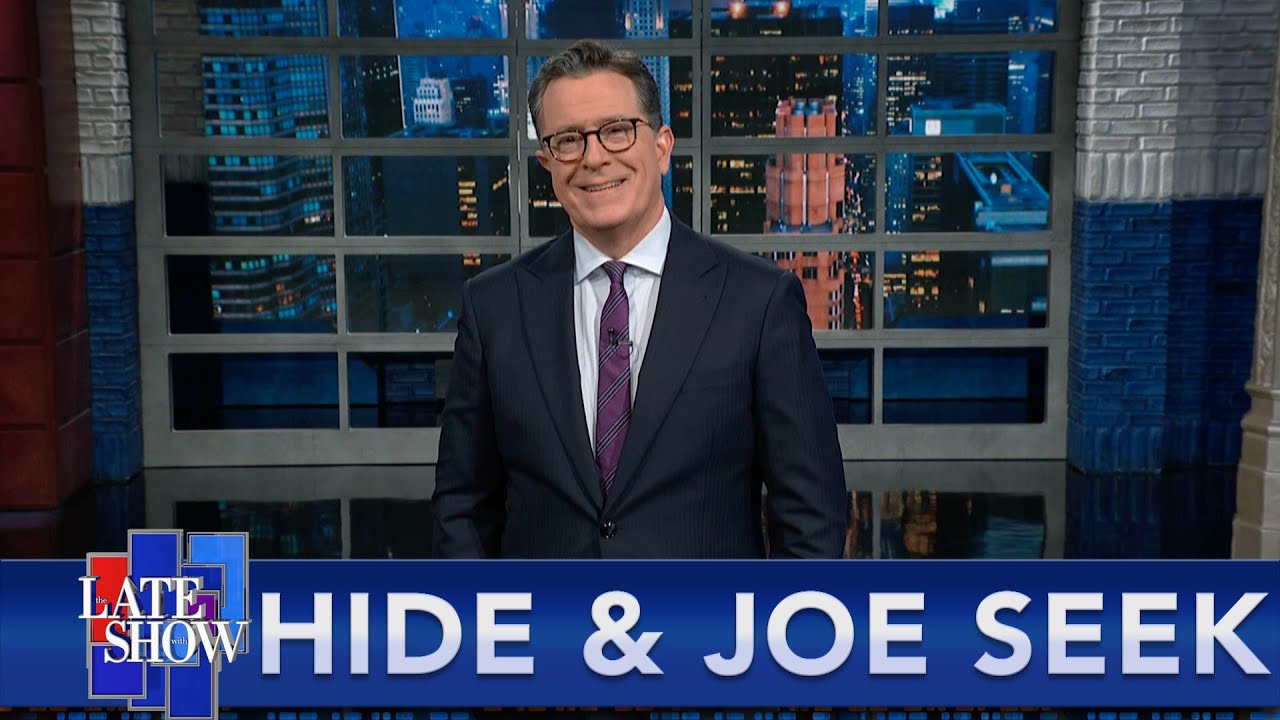 The FBI found more classified documents in President Biden's home, Rep. George Santos may have lied about starring in the TV show, "Hannah Montana," and the former president should be barred from speaking at funerals after the eulogy he delivered for one of his biggest fans. #Colbert #Comedy #Monologue 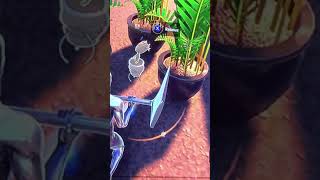 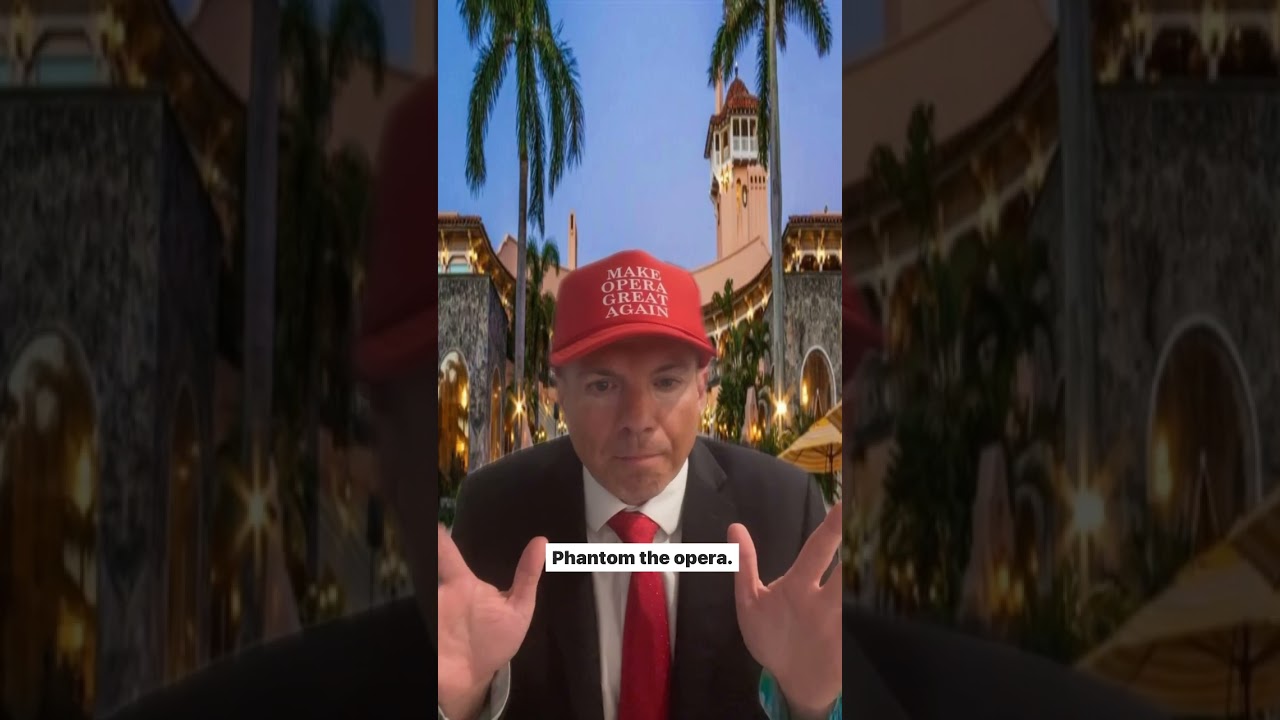 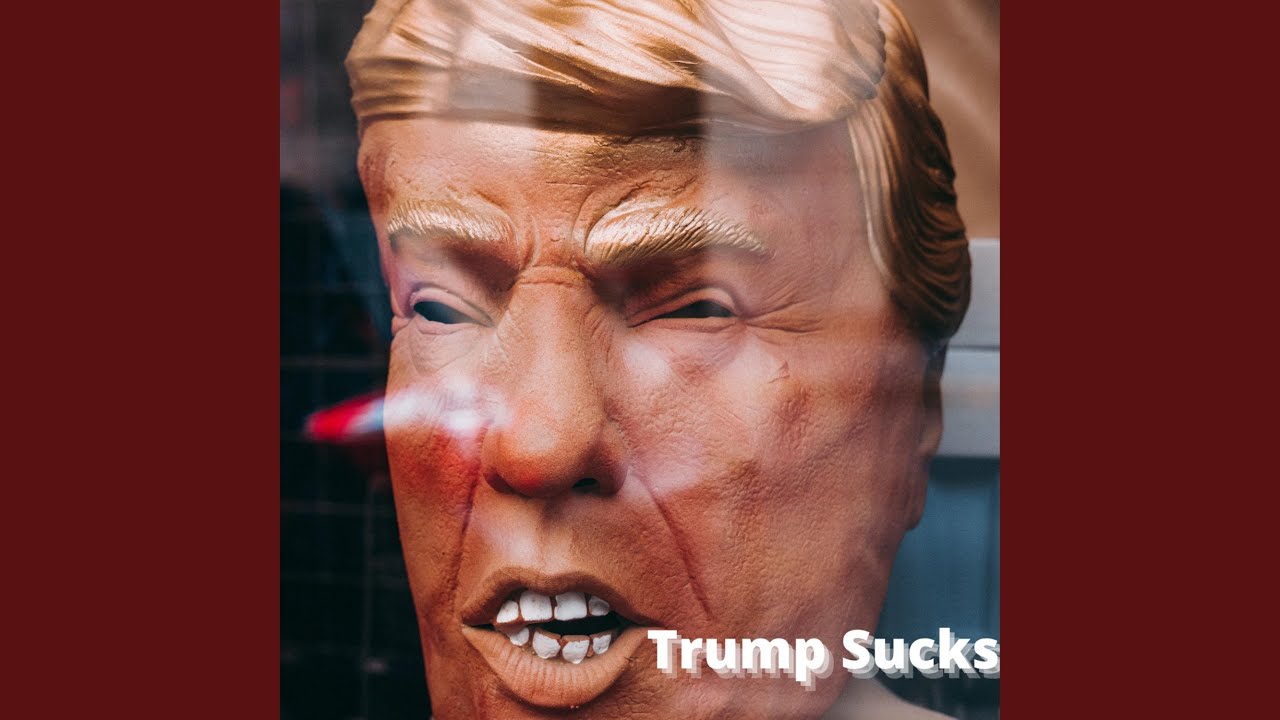 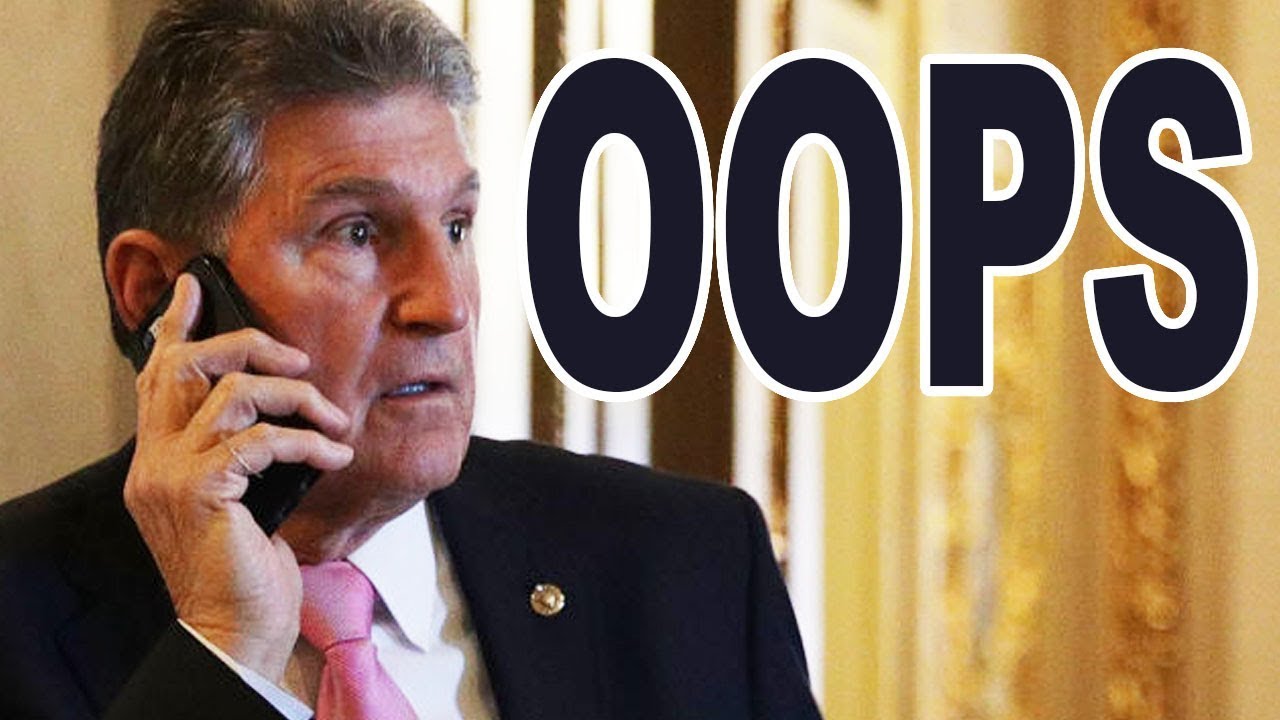 Democrat Sucks Up To Trump...Backfires

Joe Manchin played himself. Cenk Uygur, the host of The Young Turks, breaks it down. Tell us what you think in the comment section below.

“Liberals like to scoff at Joe Manchin, but after yesterday I think it’s pretty obvious that a lot of them can learn something from the West Virginia senator. He knows how to hit back.

Vice President Mike Pence was in Lewisburg, West Virginia, Wednesday where he gave a speech that tore into Manchin. Pence attacked Manchin’s vote against the tax bill and then continued: “But it’s not just the tax cut. Senator Joe Manchin has voted no time and again on the policies that West Virginia needs. When the time came to repeal and replace the disaster of Obamacare, Joe voted no. When we empowered West Virginia to defund Planned Parenthood, Joe voted no.”

Download audio and video of the full two hour show on-demand + the members-only post game show by becoming a member at https://goo.gl/v8E64M. Your membership supports the day to day operations and is vital for our continued success and growth. 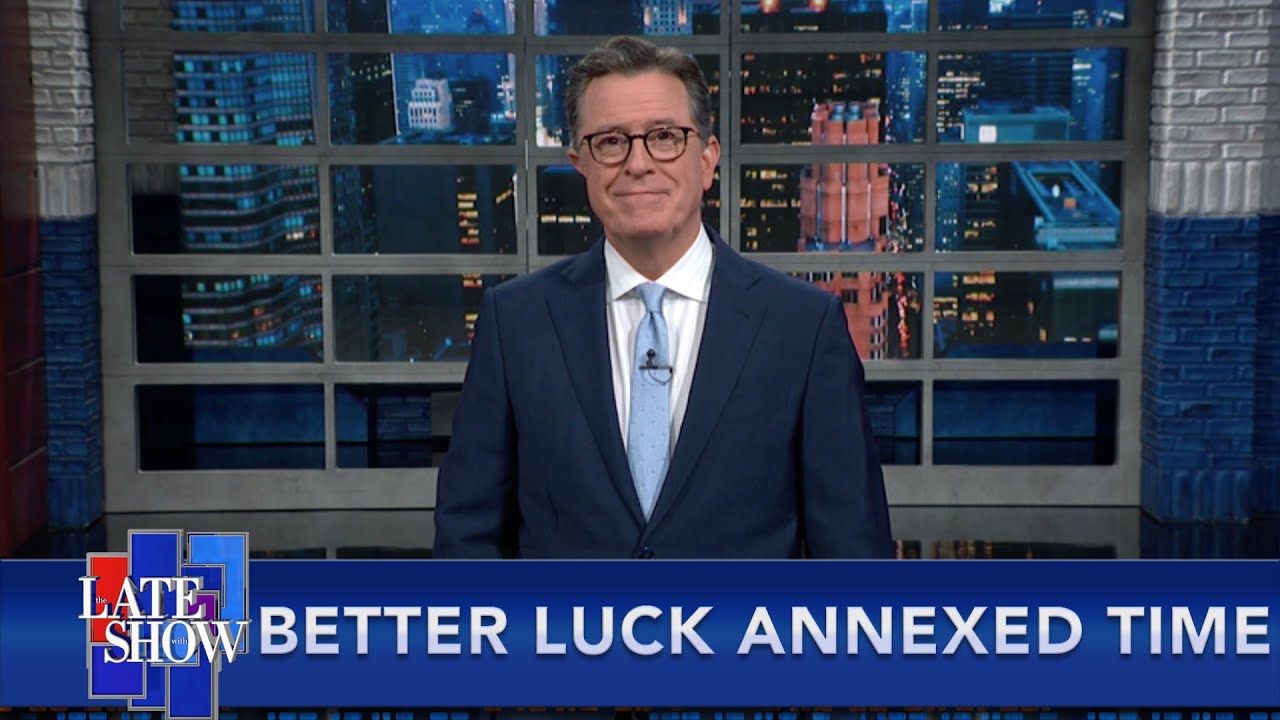 Republicans did their best to avoid labeling the former president a racist after his comment about Elaine Chao, and Ukraine's army took back parts of the country Russia announced it had annexed. #Colbert #Comedy #Monologue 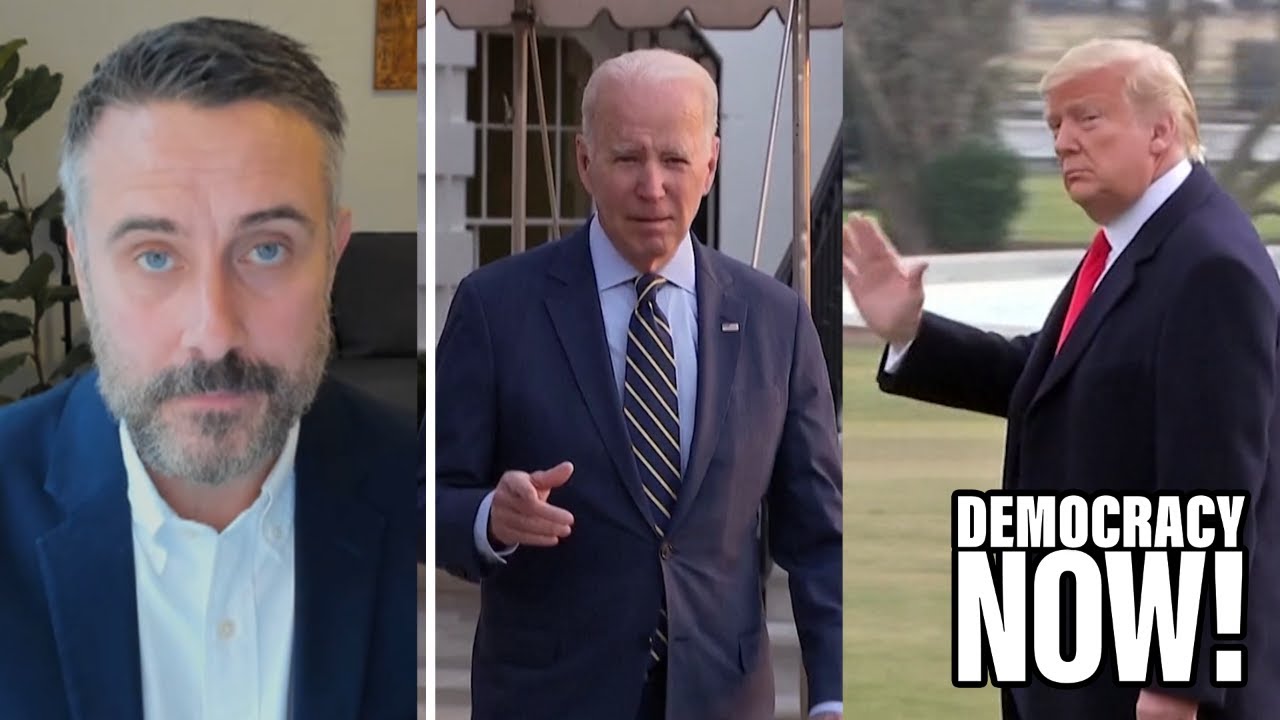 We speak with The Intercept's Jeremy Scahill about the brewing scandals over the handling of classified documents by President Joe Biden and former President Donald Trump, and how they "point to deeper systemic problems with Washington's obsession with secrecy." While the details differ, Scahill says both cases show powerful players in Washington who routinely mishandle classified documents face different rules than whistleblowers who have endured the full brunt of the law for exposing government secrets in the public interest.

Democracy Now! is an independent global news hour that airs on over 1,500 TV and radio stations Monday through Friday. Watch our livestream at https://democracynow.org Mondays to Fridays 8-9 a.m. ET.